EQ: How to use neuroscience for a successful career & excellent life

Regardless of your current LinkedIn title, you are the CEO of your career.

What is the #1 indicator of leadership potential?

Daniel Goleman literally wrote the book on emotional intelligence. In his renowned 2004 Harvard Business Review article, ‘What Makes a Leader,’ he explained:

‘Most effective leaders are alike in one crucial way: They all have a high degree of what has come to be known as emotional intelligence. It’s not that IQ and technical skills are irrelevant. They do matter, but mainly as “threshold capabilities”; that is, they are the entry-level requirements for executive positions. But my research, along with other recent studies, clearly shows that emotional intelligence is the sine qua non of leadership. Without it, a person can have the best training in the world, an incisive, analytical mind, and an endless supply of smart ideas, but he still won’t make a great leader.'

But wait, it gets better.

Emotional intelligence doesn’t just predict your professional success. It’s also an indicator of personal excellence, as in life satisfaction, as defined by you. This is super cool for two reasons.

Who doesn't love getting two for the price of one?

So, what is EQ? In neurological terms, emotional intelligence reflects the interaction between your limbic system and your frontal lobe. 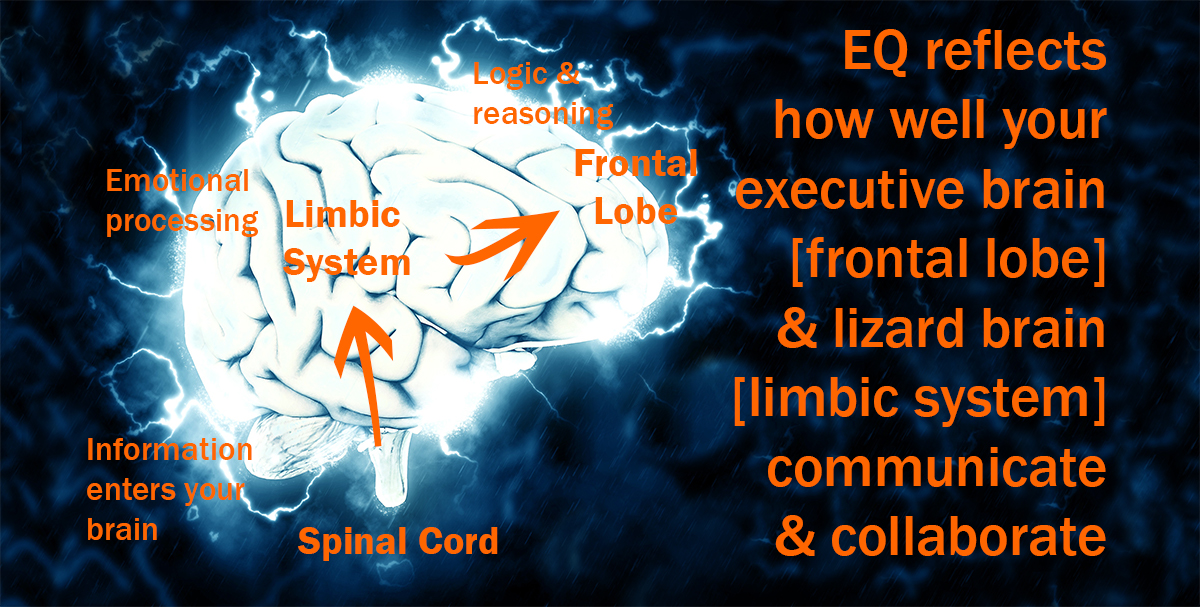 Information enters your brain through your spinal cord.

From there, it enters the oldest part of your brain. Colloquially, the lizard brain. The limbic system handles your sensory perception and parses that much of information as emotion. The nickname refers to the fact that this, physical senses, startle responses and other basics like procreation, are pretty much all that lizards have to work with.

Don’t underestimate the value of billions of years of iterations and evolution. The limbic system’s programming is fast, efficient and forceful. This is why you ‘trust your gut’, aka your inner dinosaur.

Only after the limbic system, does information reach the evolutionary newbie we know as the frontal lobe. Often referred to as the executive system, the frontal lobe is where we incorporate logic and reasoning.

And EQ? EQ is what happens when your lizard brain and executive brain confer.

So, yes, it’s physiology. And yes, there’s a genetic component. But it’s also psychology and neuroscience. And thanks to our frontal lobes, we can, with guidance and sustained effort, get in there and update the system.

Looking inward, EQ reflects the interaction between your brain’s emotional and rational centers. But leadership is not just you in a vacuum.

By definition, leadership is the act of navigating a larger context that cannot be controlled. Thus, there is an analogous, external component to EQ. It is how you understand the internal components of other people. And how you locate yourself in the broader context of your society.

Like leadership, EQ is comprised of personal and social competencies.

Developing your EQ, like anything worthwhile, is a life-long pursuit. This intentional development can be understood as four tactical areas:

Your career and your life need an intentional and skilled leader. And that’s you!

With conscious effort and continuous development, you can cultivate your EQ, and in doing so, cultivate your excellence in the forms of professional success and personal fulfillment.

Want to learn more about the neuroscience of emotional intelligence, including actionable strategies for cultivating your EQ and leadership skills?

Click here to learn more about the July 31st WESTevent which will explore EQ as an indicator of leadership skills in an interactive workshop led by Rita B. Allen.