WEST’s Women in Science and Technology Awards Event was SOLD OUT!

Last week, more than 130 men and women gathered in Cambridge to recognize the honorees in WEST’s Annual “Giving Back Awards” ceremony. EACH YEAR for the past 9 years, WEST has brought the biotech and tech community together to honor incredible women from the science, technology and engineering fields who go above and beyond and selflessly give back to society. This year, in addition to recognizing women, WEST added a new accolade designed to recognize men who have demonstrated commitment to supporting and advancing talented women in STEM careers.

The WEST AWARDS evening began with a deafening buzz, as senior leaders from the biotech and tech communities cross mingled and networked with old timers and career newcomers alike. After a good hour of socializing over delicious wine and tasty hors d’oeuvres (and some competitive bidding at the Silent Auction!), the energized group moved to the auditorium for the formal awards.

With awards spread between four categories, the ensuing stories of selflessness were engaging, humbling, and heartwarming.

The first awardee of the night was Heather Multaupt, Senior Engineering Director at Brooks Automation who was recognized for her awe-inspiring contributions in the UNSUNG HEROINES DOING EXTRAORDINARY THINGS awards category. After her husband was diagnosed with cancer, Heather set out on a mission to increase the number of potential donors signed up with bone marrow registries by working in partnership with the Gift of Life organization and The Resolution Run to Kick Cancer. After Heather’s husband lost his battle with cancer in 2014, Heather launched the Kent J Riley Charitable Fund in his memory. In the past 2 years, the Fund has provided 16 scholarships to young athletes interested in STEM or health sciences. Heather’s passion and strength was breathtaking, and set the tone for the rest of the evening.

The second UNSUNG HEROINES DOING EXTRAORDINARY THINGS award went to Elaine Webb, Senior Materials Manager at Applied Materials. After re-launching her own career in 2010, Elaine set out on a mission to increase awareness and access to STEM education in her local Gloucester community. Elaine initiated outreach programs with Gloucester Schools, and Gloucester Education Foundation, to help inspire students towards STEM careers, and she established the Gloucester Program for LEAP for Education, a non-profit organization providing career, college readiness, and advising for low-income first-generation students. Elaine’s energy and enthusiasm was evident as she inspired many in the audience.

Honorable mentions in the UNSUNG HEROINES DOING EXTRAORDINARY THINGS category were given to Lauren Laidlaw, Senior Director at Safety Partners, who dedicates a significant amount of her time giving back to her local Revere community, and to Jessica Pearlman, Project Manager at Teradyne, who regularly runs community fundraisers and has more recently opened her home to foster children, providing a warm and safe environment, along with food, a bed, and some love.

WEST was thrilled to honor two men for the first time in the new GUYS WHO GET IT awards category. Terry McGuire, Founding Partner at Polaris Partners, and Richard Murray, CEO of Jounce Therapeutics were nominated for the many ways that each of them has invested in supporting and advancing the careers of many women. Terry drew applause from the audience when he declared his desire for the GUYS WHO GET IT award to disappear at some time in the future – a future state where gender imbalance no longer exists.

The evening continued with recognition for two remarkable women nominated for the MAKING A DIFFERENCE IN MEANINGFUL WAYS awards. Connie Jeffery, Associate Professor at UIC was recognized for her dedication to mentoring women in STEM. Camara Samuel, Senior Engineer at Procter and Gamble was recognized for her contributions to helping her company identify and recruit more diverse talent, as well as her volunteer hours working with the Science Club for Girls.

In the next category of awards, two women who are early in their careers were recognized for MAKING A DIFFERENCE IN THE COMMUNITY. First to be recognized was Lindsay Kuhn, a PhD Student at Brown University. Lindsay is the founder of a new online community, Inventing Heron, whose main objective is to encourage young people, especially women, to go into STEM. The last awardee of this category was Zoe Sobin, Senior Software Engineer at Hubspot. Although only 2 years out of college, Zoe is already having tremendous impact in the tech world. She designs and runs technical workshops to teach women studying computer science how to build their first web application.

And last, but not least, three WEST volunteers were awarded for the time and effort they contributed to WEST as an essential part to helping the organization prosper. Those awardees were Elise Huang, Anna Li, and Anne Thessen.

The stimulating and uplifting evening ended over delightful desserts, was accompanied by a little more bidding on the Silent Auction, and some additional conversing with the movers and shakers in the science and tech fields.

We look forward to seeing you at next year’s event! 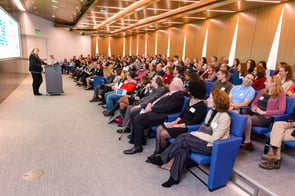 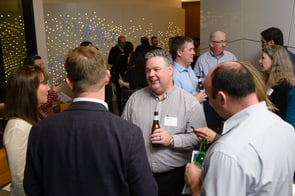 WEST: Promoting Women’s Careers, Preparing Tomorrow’s Leaders -- a non-profit organization focused on advancing the careers of women in the enterprise of science and technology by providing women with the inspiration, knowledge and connections to reach their full potential.