“Third or nothing! Third or nothing!” This is the motto of students in the Puffs, a parody play of the Harry Potter series, told from the perspective of some spectacularly untalented student wizards. The Puffs are one of four houses (the other three are the Brave, Smart, and Snake houses) vying for points in the annual house competition at a certain Magical Academy. Every year, the Puffs place last in the house cup competition, but this year, they are determined to place “Third or nothing!” 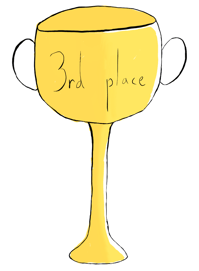 Is third place a goal worth striving for? In the midst of my annual January resolution to exercise more, my husband saw me madly pedaling in the last minute of a spinning class. He asked me why I was doing that when I was supposed to be cooling down. The reason? I wanted to at least match my personal best in “output,” a metric of how much work I did over the ride.

My goal on the bike was a version of striving for “third or nothing.” I have had an on-off relationship with exercise throughout my life, and am now rehabbing after surgery for a knee injury. To be even in the top half of the leaderboard rankings would be an unrealistic goal. But it is realistic for me to set tomorrow’s goal to be at least as good as or better than today. My knee injury forced me to focus on strength training goals for one day at a time, but also led to the most consistent stretch of exercising that I’ve ever achieved.

“Third or nothing” doesn’t have to mean striving for mediocrity. Our goal-setting is influenced by many factors: our starting point, our knowledge or skills, support system, unexpected obstacles, or competing personal or professional priorities. Matching our personal best, gaining incremental improvement, or treating ourselves with compassion when we fall short, may all be as meaningful as a podium finish. At the end of the Puffs, the students haven’t won the house competition, but their growth gives them the courage to band together in an epic finale battle to defend their community from the Dark Lord.

WEST’s annual theme for 2021-22 is to reflect on achievements and reimagine goals, to emerge stronger as leaders. January and February are natural times to reflect on past achievements and plan future goals. A colleague recently shared that her 2022 goal was to do the best that she possibly could at work while prioritizing allocating time and energy to her child going through a tough time. She criticized her own goal as insufficiently aspirational, but I found her ability to prioritize what mattered most both realistic and inspiring.

Susanna Huh, MD MPH is a Senior Medical Director at Takeda Pharmaceuticals. She is a member of the WEST Advisory Board. Connect with her on Twitter @HuhSusanna or LinkedIn.