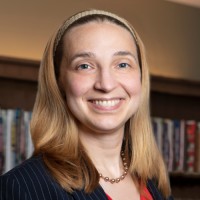 Dr. Anne Thessen is a researcher at the Center for Health Artificial Intelligence of University of Colorado Anschutz Medical Center. Anne is well known for her work on data infrastructure and the application of semantic technologies and machine learning in biodiversity and earth science. She has been an avid volunteer at WEST events for over 10 years and was the recipient of the WEST Giving Back Award in 2017. I recently had the privilege to speak with Anne about her journey, her involvement with the WEST community, and the advice she has for people considering a career transition. - Emma Sullaway

ES: I would love to start with your career as a researcher of oceanography and phycology. Was there a particular moment that served as an inspiration for you to become a researcher in the environmental science field?

AT: I made the decision that I wanted to be a marine biologist because of a marine science class in 7th grade at Vista Middle School in Ferndale, Washington. I did really well, I loved it, and I thought it was really interesting. Between middle and high school, my family moved to Louisiana. At the time in Louisiana, you could get free tuition at any state school if you graduated with a 2.5 GPA or more. There was only one state university that had a marine science program: Nicholls State University. It was a really good choice–The class sizes were small, I got a lot of individual attention from the professors, and I was able to get involved in a lot of research as an undergrad. I did work as an undergrad that was the equivalent of a master’s degree and got myself some publications.

For grad school I went to Horn Point Lab, a world-renowned field site for the University of Maryland. I had a very supportive, interesting grad school experience. I actually had a one-year-old when I started grad school. That didn’t seem to faze anybody there, which was wonderful. They had an onsite, affordable daycare which was one reason why I picked Horn Point Lab. After grad school, I did a post-doc there looking at nutrient measurements in the arctic ocean. I did another postdoc after that where I was working on two databases: Microbis and the Encyclopedia of Life. After a couple years, I moved into the marine biology laboratory as a research faculty position and continued to work on the Encyclopedia of Life and the Data Conservancy.

ES: When I’m hearing your story, it sounds like you found so much success in an academic field that you have been passionate about since you were a kid. I know there probably were also moments that seemed scary. Were there moments like this from your story, and how did you bounce back?

AT: The Data Conservancy was supposed to launch my academic research career but instead it got defunded by the NSF, which was very upsetting to that plan. At that point, I was trying to look for other jobs and was being consistently rejected or ignored. In the meantime, I was being asked by people that I already knew to join their team to take care of their data needs. Since an academic job application takes a week to put together, I decided that I did not have the time to waste on these applications.

It was during this period that I joined WEST. My first event was a networking night and I then started coming to seminars, and I found them very helpful. There was one that was about finding your value proposition. That was the one that helped me realize that I should start my own consulting company and stop working on academic job applications. WEST was very helpful in giving me the confidence and knowledge that I needed to “hang my own shingle”. WEST helped me figure out my value proposition. I also joined the Society for Professional Consultants, which helped me understand general business angles like how my taxes were going to work.

ES: What was it like to start your own company and transition from a career in academia?

AT: The process from hearing that my project had been defunded to starting my own consulting company, the Data Detektiv, took two years. It took me time to find my way through “the wilderness” so to speak. There were a couple things that helped me get my feet under me. The first was teaching myself to write code. The story of how I learned to code is pretty crazy. I had a colleague who got super paranoid and thought I was trying to hurt his career. He started withholding files and code. I was in a contract, my first one before I officially started my consulting company. My choice was to learn how to code or fail. At the time, it was hugely stressful. But now I know that if I hadn’t learned to code, I wouldn’t have been able to start my own consulting company or move into the data science direction.

Another important part of finding my way “through the wilderness” was joining organizations like WEST. I also joined one called the Ronin Institute. It is a non-profit that provides grant admin support to scholars, researchers who are not affiliated with a university. They really made me think about what I would get out of being at a university and ask if I needed anything from them that I couldn’t get elsewhere. The answer was no. When I started my own consulting company, the Data Detektiv, it was just me and it stayed that way. After five years, I began exploring different options for the future of the company. What would it take to grow my consulting company? Should I try to get on at a different company? At the end of the day, I was approached by someone I already knew who told me that they wanted to hire me.

ES: How did you make the decision to transition back to academia? What has that experience been like?

AT: The transition wasn’t a problem because I knew, trusted, and liked the person I was going to work for. I questioned whether I really wanted to go back to academia, and if it had been anyone else, I probably would have said no. They were starting a new lab at Oregon State University that would have given me an opportunity to work remotely on semantic technology full time, which was what I wanted to do. Last year, someone at the University of Colorado Anschutz Medical Campus approached my boss and offered the lab an excellent startup deal where we could still work remotely. The deal was so much better than Oregon, so we are at the University of Colorado now! We are in The Center for Health AI. It is specifically an artificial intelligence, computer science, semantic technology department.

ES: Wow–what a year it has been! You have made a lot of transitions in your career–From academia to industry, now back to academia. What advice do you have for people who are about to make that next big step or are currently in a big career transition?

AT: At the end of the day, the takeaway is first, you can go back and forth between industry and academia. Two, you don't have to structure your lab in this super hierarchical closed-door fashion. It pays off to really think about what you want to do, why you want to do it, and if the university offers you something that would make all the hard work worth it. The high-level advice is to be flexible. Sit down and figure out what you bring to the table because it might be something that you just didn’t think of before and something you might really enjoy. Be open to learning new things and going down a path that you hadn't thought of before.

ES: That’s great advice! Outside of your career, I know that you have been involved in the Cat Connection. Can you tell me about your experience volunteering?

AT: I started volunteering with The Cat Connection when I was “in the wilderness” and wanted to do some service locally and meet people. I started as a volunteer in 2012. I started scooping cat litter and joined the board of directors in 2016. This year I am the president! I am proud of all the work I have done with The Cat Connection. Under my watch, we have almost tripled our budget, opened a shelter, and moved from being a small grassroots organization to being enterprise cat rescue with a shelter.

ES: That is such incredible work, but it must take up a lot of time! How do you maintain a work life balance?

AT: Work life balance has been tricky. Over the past two years, I found my upper limit. I have started doing various things to set those barriers. For example, I black out times on my calendar when I don't have meetings. I also set notifications to not appear between hours after work until 9am. Right now, we are working to set work-life balance policies in the lab such as instituting no-meeting weeks once a quarter. The feedback I have gotten is that there is not enough focused work time, so we are trying to reform how we handle meetings. I have actually started taking real vacations without checking my work email!

ES: You have been a volunteer for WEST for 10 years! Why would you recommend WEST to others?

AT: The seminars and workshops that they have are supremely valuable and practically useful. I never would have started my own consulting company if it hadn't been for WEST. It also helps to expand your network. I’ve been able to get some great advice from some really high-level women. WEST gets you thinking about a lot of different paths that you wouldn't have thought of otherwise.